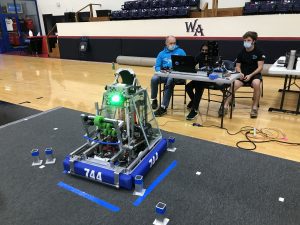 This year, our WA high school robotics group is celebrating 20 years of its innovative and award-winning program! Team 744 Shark Attack has a long and rich history, despite only being recognized as a team since 2006. Prior to that time, our team was a part of retired Team 710 PAW and also had affiliations with retired Team 267 Demolition Squad. Therefore, some of our mentors have been a part of Team 744 for over 15 years. We are grateful to alumni family-owned, APEX Machine Company which has been the strand that remains constant through the fluctuations in the team.

This year has been like no other for our robotics team. COVID made it impossible to assemble large groups for on-campus meetings and FIRST Robotics announced that all in-person competition was suspended for the 2021 season. Therefore, our team was forced to compete in virtual challenges with just a skeleton crew. With a roster of 53 students, the meetings typically included only 3 to 10 people.

On Tuesday, March 23, our robotics team presented to FIRST Robotics Competition judges online. This was the culmination of weeks of preparation and the presentation team represented our school and Shark Attack FRC Team 744 very well. Lily Clemens, Billy Garcia, Alejandro Molina, David Philips, Charlie Zou, James Cochrane, and mentors Lauren Cooley, and Cathy & Kent Stolley formed the final presentation team. They presented details of the design process, robot attributes, and performance to judges who then quizzed our students on the same. We hope that our team has impressed judges enough to earn a technical award.

On Wednesday, April 7th, our team uploaded final videos and scoring statistics for 3 major robot challenges that our Drive Team and Programming Group have spent the last two months preparing for. These will be certified and compared with the work of teams from around the world to determine our ranking in this year’s competition. Our Programming Group is led by Clayton Early and includes Charlie Zou, Dean Reid, and mentor Scott Greven. Our Drive Team Leads are Clayton Early and Jonathan MacClugage. Mentors Gregg Coningsby, Jeff Early, and Kent Stolley assisted students with revisions to our robot in preparation for this season and with meeting logistics. We are excited to compete this year, albeit virtually. Go Shark Attack!